I now know why you get this over with when you are 17. Because, at that age, you are so desperate to spend as much time away from home as humanly possible you’ll do anything to get away.

Now I’m 30 I’ll do anything not to get away and want to spend as much time at home as humanly possible. No plans are quite honestly the best plans, so dragging my tired ass out 2 nights a week for a 2 hour driving lesson after a long day at work is a tall order. I don’t even go to the cinema.

However, I’ve lived the past 30 years looking on to anyone who can drive with such admiration and putting them up onto this mountainous pedestal. Growing up, anyone I would meet who could drive would be this untouchable because er hello I mean they can drive!  They must be so super talented and clever and coordinated and successful. I mean really, that bus driver is basically a super hero. This skill is one I have never thought I would ever be able to succumb to and I have put off learning for years.  Until now. Now I am FINALLY doing it. Now I am ready.

It doesn’t come without it hurdles though. Manual cars are the current bain of my life.  Who on god’s earth invented such a complicated method of travel.  Definitely not the same person who invented the scooter.  Gear changing is the automobile version of getting out of an awkward conversation. You don’t want to be too hasty or abrupt, you have to simply ease out of it with equal pedal pressure of urgency and kindness.

Then there’s the road rage.  I’ve only just noticed how incredibly angry Londoners are. We are worse than the Parisians!  I mean I knew we were anxious introverts but aggressive extroverts I had no idea.

Hooting, shouting even spitting at one point.  I had a pizza delivery man actually stop in the main road get off his scooter and tap my window because I accidentally went into his right of way.  Do legit L plates mean nothing anymore?

I am no one to talk.  Having lived in London for pretty much my whole life I am also fairly impatient and when/if I do finally get my licence I have no doubt my impatience will ring out as road rage. But seriously, being behind the wheel and driving is like being in a parallel universe. There are different rules, signs, colours and temperaments.  You see a different side to people.  It is in fact a completely different world.

This got me thinking about the restaurant 108 Garage where Jimmy and I had Saturday lunch last weekend.  It’s situated on the corner of Goldborne Road and Portobello Road (basically on the junction between the Buggy Highway and Selfie Street.) However, I read the review from Jay Rayner and as he is my benchmark to all things ‘restaurant’ I had to book a table.

I went online earlier in the week to book and had to endure a lengthy process of giving a pre payment on my credit card to guarantee the booking and be charged for any cancellation. I found this quite odd considering this isn’t a well known aspiring restaurant. But I went with it anyway as stupid I felt reassured that this would mean the Resturant would be busy and bustling with people aching for a table.

Not so. We arrived and the place was completely empty. I know it’s called 108 Garage which alludes to an empty open warehouse space, but this took it to the extreme. “Thank GOD I booked that table”. I said to Jimmy.

We sat down and looked at the menu whilst also taking in our surroundings which on first glance looked like an old 90s New York bar.  A kind of secondary set location on an early season of F.R.I.E.N.D.S.  (You know, the one where Monica goes on a date with old high school boyfriend kind of place). Exposed brick, pointless wires and shards of metal stuck on the walls. The décor certainly took the ‘distressed’ to the depressed in its aesthetic.

The music as well was something I have never heard before (and I’ve been to some gritty raves in Hackney) It was like they were throwing used and broken squeaking toys against a wall.  I had to ask them to turn it off as it was too much to bear.

However, I know the food is good so I took this all in my stride.

There was a choice of tasting menu (£45) and a la carte.  The menu changes every day due to what’s in season and what the suppliers have available.  Jimmy and I went a la carte as it was seemingly too complicated for the kind waiter to explain non-meat dishes for moi.

They first gave us a complimentary ‘snack’ of frozen popcorn by means of liquid nitrogen.  This really was gastronomy circa 1995 territory. They may as well have served it with a foam too. However it tasted good and I’ll admit I liked the theatre. 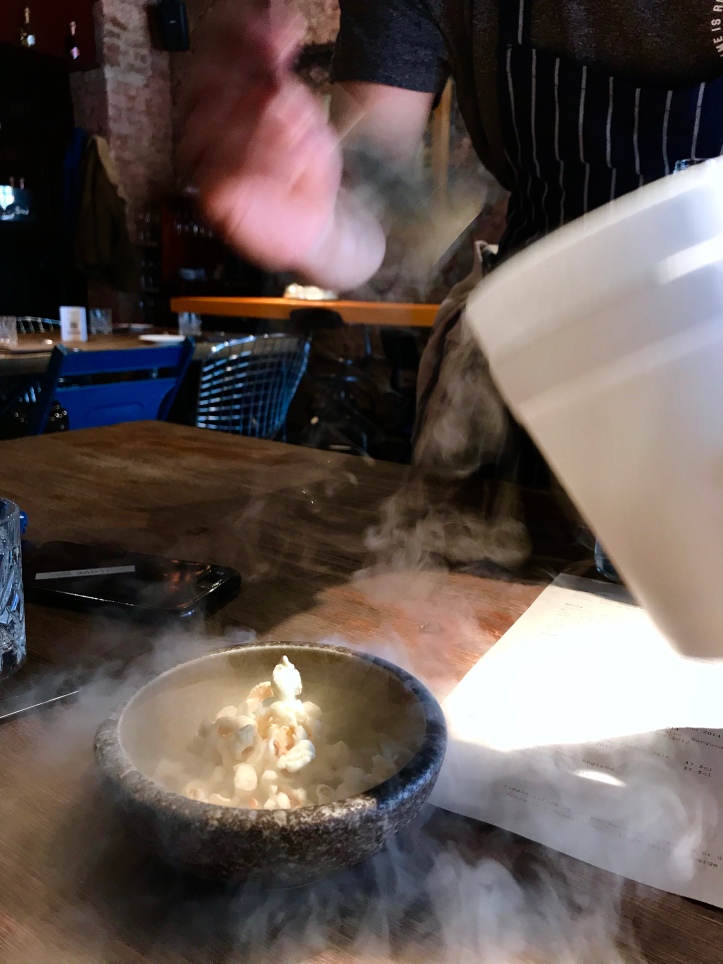 Now onto the bread.  I am going to announce my FFT Bread Awards later this year and this could be a contender for a runner up. In short, thick, squidgy, malty yummy… 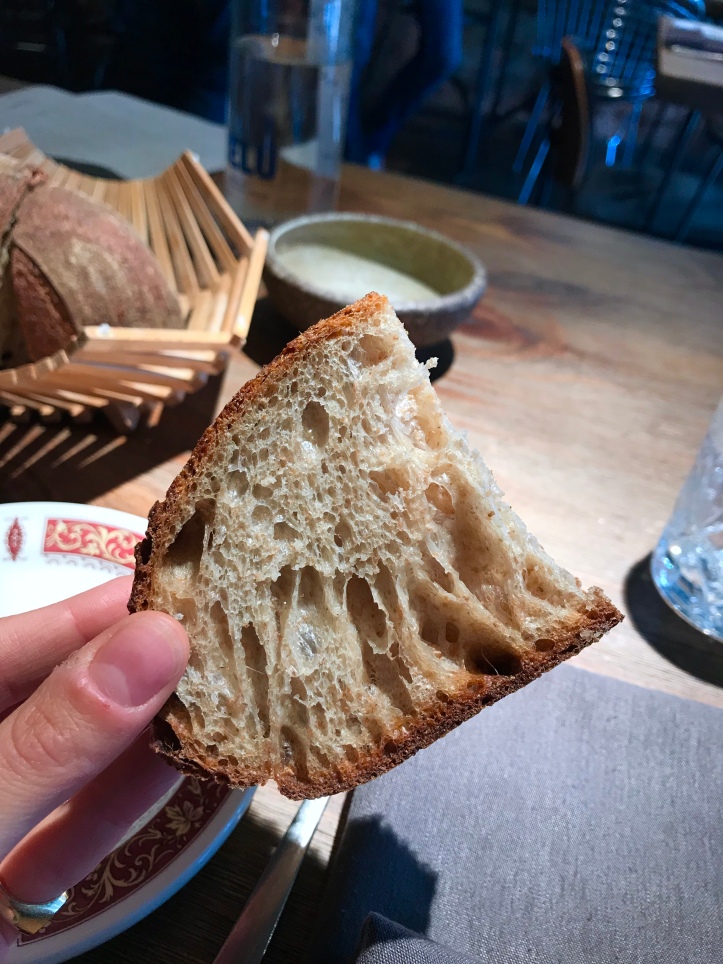 It was served with a pot of chicken liver parfait which Jimmy really liked.

Then we had jellyfish which was recommended by the waiter and I’m so grateful he did as it was delicious.  It was tangy and moreish, like a ceviche.

Alongside we had radishes and a sesame dip which was also a triumph.  Such interesting textures and flavours.  This chef clearly knows what he’s doing.

The chef now being Chris Denney (for the 2nd time round) who incidentally co-founded 108 Garage with his entrepreneur partner Luca Longobardi.  They appointed another chef, Greg Clark earlier this year so they could both concentrate on their business expansion.  However, he mysteriously uprooted a month after starting the job and moved to Hong Kong.

However, Gumtree chef (Longobardi found Chris on the sales site) is now back in the kitchen and is triumphantly creating innovative and exciting dishes.  The duo also launched Southam Street (also in Notting Hill) with talks on a third site Home Noir a Members Club…

Our second plate was Celeriac, apple and truffle. Beautifully balanced and beautiful in its look too. However, if it says truffle on the menu, I would like to taste truffle.  Seeing truffle and tasting it are two different things.  This is something I have noticed at alot of at restaurants recently when it comes to truffling.  There either isn’t enough, or transport has made that particular truffle lose potency but chefs are becoming very mean when dishing it out. A shame.

Then all of sudden mid truffle crunch massive alarm bells (not metaphorical) started going off.  Ear piercingly so.  The waiters started running around like headless chickens and thankfully managed to stop the ruckus after a minute or so. However, there was no explanation as to why this happened to the 2 and only patrons in the entire restaurant (me & Jim!). Jimmy and I just sat there bewildered.

Things got even crazier a moment later when a woman (3rd patron) came in and sat down at a table on her own in front of us. She clearly was having her own personal party and was on another planet.  She was asking some very niche questions… special note on when she asked the waiter if she could eat the plate and if the radishes were fish. She was amazing.

Anyway Jimmy then had some meat plates. His instant comment when his first dish came out was on the hay that the plate was resting on. I didn’t mind it but he thought it was a bit much. However of the food he said was subtle, light but extremely well balanced.  The broth was clear as day and the dumpling, tortellini style parcels were light and delicious.

Pudding was an ice cream fayre with a fruit and donut but annoyingly I can’t be more specific as I didn’t write it down and I also didn’t try it (no sugar September) but Jimmy ate the entire thing so that says something. 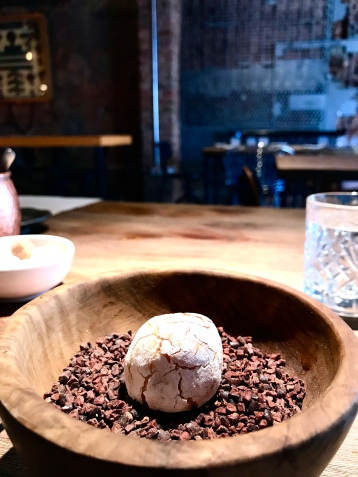 All in all, 108 Garage is like trying to pass your driving test in a manual car. It’s uncomfortable, you’re not quite sure what’s going to happen next and you feel like you are in a parallel universe.

The food however, the food is certainly of another world but in a good way.  Although I don’t see this restaurant having longevity I look forward to seeing what this diverse duo do next.